Leaked sketch suggests Honda is about to bring back the Dominator

We’ve seen this reported on several websites. This one from Harriet Jordan on www.adventurebikerider.com pretty much sums things up. There’s not much fact available anywhere, except there is a drawing submitted for patent, and this is kind of how the Africa Twin got its start. We can’t see any real relevance in the main image, but damn! It’s horn!…

A leaked sketch suggests that the re-birth of the Honda Dominator may be just around the corner, which is good news to the many fans of the bike.

The sketch, leaked by MoreBikes, implies the bike will have all the capabilities of a dual-purpose motorcycle and it will certainly be an interesting concept to rival that of the BMW G 310 GS and KTM 390 Adventure.

The drawing points to the idea that Honda is possibly looking to get back into the smaller-adventure bike category.

The bike would be joining the likes of the BMW G 310 GS – which was unveiled at the 2016 EICMA show. At the same event, Kawasaki also presented the Versys-X300, and Suzuki made public the DL250 Concept.

The drawing reveals Honda’s design for a new two-part switch that is going to be sited on the bike’s left handlebar.

The switch suggests that the bike will have multiple riding modes allowing the rider to select a mode depending on their preference and the terrain.

The size of the bikes engine remains a mystery, but there have been speculations that it’ll be a 250 cc after Honda boss, Koji Sugita, said that the Japanese factory was looking at a 250cc Crossrunner type of bike.

The original was a 643cc, single-cylinder four-stroke that delivered 44bhp. It was manufactured from ’88 to 2000, and it became an iconic bike for that generation.

A new patent filed by Honda may reveal the company is ready to bring back the discontinued NX650 Dominator from the grave. UK-based MoreBikes Magazine broke the news after uncovering a drawing filed with the US patent department by Honda.

The NX650 (or Dominator as it’s known outside of the US) debuted in 1988 and only lasted two years in the US. This was a time before Americans had an appreciation for adventure bikes and the NX650 never took off. However, the Dominator was a great success in world markets where it continued production until 2001.

The old NX650 was powered by an air-cooled 644cc single that produced 44 horsepower. An XR650L-based chassis and 21″/17″ wheel combination gave it good off-road agility, while a small windscreen, luggage rack and 4.3 gallon (16 liter) tank made long-distance travel an option.

While the patent drawing may be purposely disguised, it does show some similarities to the original NX650 Dominator in the styling and it also has the proportions of a middle-weight adventure bike. 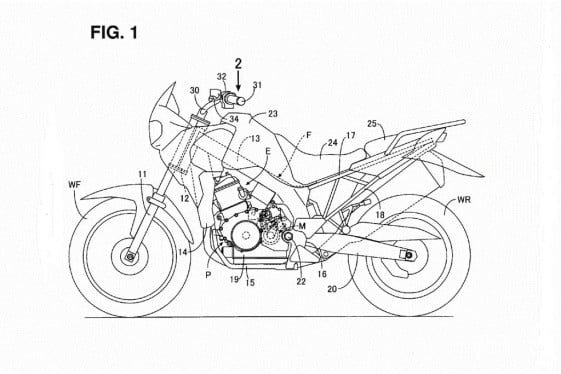 A patent filed could reveal a new Honda NX650 Dominator for 2017.

Few details are available at this time and Honda has not made any announcements yet. But we did see this same pattern about a year and a half ago when Honda released a patent drawing of the new Africa Twin. Honda’s genius marketing team slowly leaked more details about the new model that caused a frenzy of activity on social media leading up to the final reveal.

At this point, we don’t know what size the engine will be or even the number of cylinders. A 650cc single is probably more likely than a middle-weight twin that might take sales away from the NC700X. 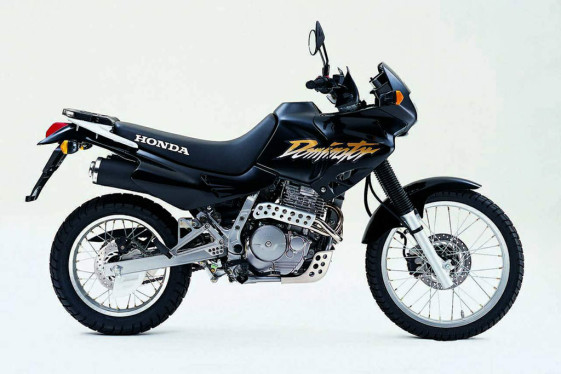 A new Adventure Bike with a 650cc single, fuel injection, 6-speed and modern electronics would be an excellent entry-level machine. And with the release of the Africa Twin, Honda seems to have a new-found interest in building ADV bikes with real off-road capability. If we could have our dreams answered, the new Dominator would be based on the old water-cooled, aluminum-framed XR650R (the undisputed Baja 1000 winner from 1999-2006). The light-weight, agile, powerful and reliable XR650R would make an ideal platform for a truly off-road-capable adventure bike.

In these first few months of the year, the Africa Twin has been the best selling Adventure Bike in the category. Strong sales in the Adventure Touring category may be what’s convinced Honda to take more risks with exciting new models. Only time will tell if the Dominator will be brought back to life.